I swear, I’m not cluttering. I have my brass pencil sharpeners and a handful of knives to sharpen pencils with, but sometimes, I get lazy. And for those days, a rotary sharpener can help out. The Carl Angel-5 supposedly gives a long sharp point for a decently low price. But can this “Made in China” product have the quality to sharpen pencil after pencil? Let’s find out.

My Angel-5 came in a different packaging then the other Angel-5s on the shelf. I decided to take the risk, though, hoping that I got some older box or something. I haven’t really concluded with why this box is different. It doesn’t really matter though.

The front and back of the packaging had the same design, but the sides are different. One side showcased the sharpening capabilities, such as the clamp, while the other showcased the internal mechanism and the desk clamp.

The top had a little sticker indicating the color of the sharpener (red in my case) as well as all three colors that are available: red, blue and black. 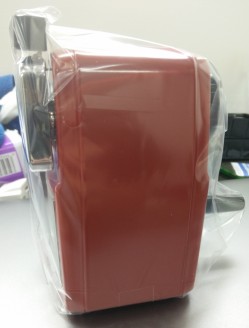 Open the box, you see the sharpener on the left side of the divider. On the right side, there is the desk clamp. both are wrapped in plastic. 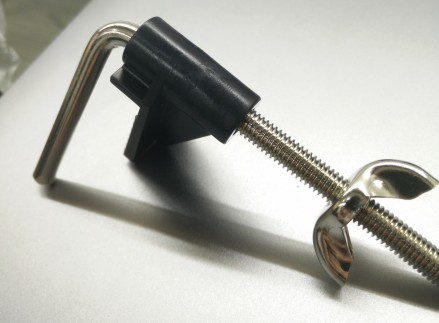 There is wear on the plastic parts 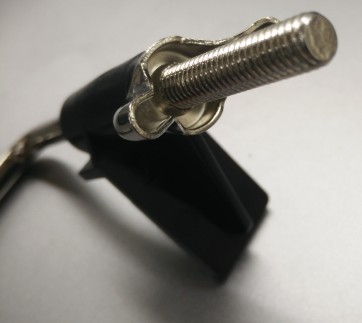 Starting with the clamp, the parts look like they are made well enough. The plastic parts show wear along what look like joints and are not polished. Further, there are lines and imperfections from the molding.

On the other hand, the metal parts are a tad porous and the stamped metal winged nut is not completely even. However, the threads are perfect and the nut has little play. 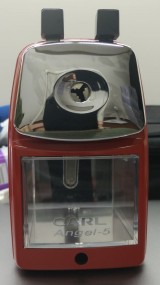 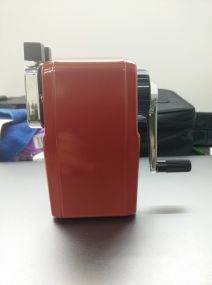 The sharpener itself is a beauty. The front features a steel plate that is super shiny. The shavings container sits underneath it and is plastic. They are both immaculate. There were no noticeable scratches or dents of any sort.

The body of the sharpener itself is made of metal and is painted red. I was unable to find anyplace where the paint had chipped. The paint is smooth all over and has a nice sheen to it. Because the body of the sharpener is also made of sheet metal, there are some small imperfections. For example, the areas where pieces are connected are not always perfectly spaced and small paint bubbles can appear. However, to complain about such issues is petty. 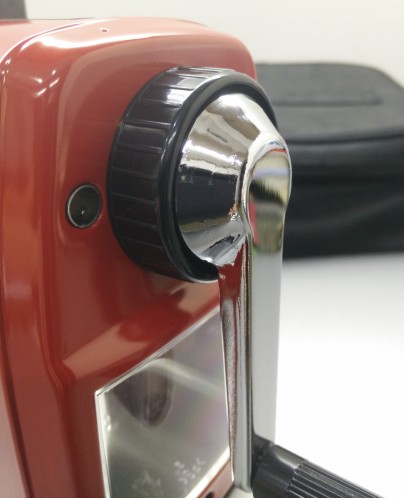 The back has  a cranked sided by two black screws. The crank is also made out of the same metal the front plate is made out of. At the end of the crank, a handle is attached with a rivet. It is a plastic ribbed handle that rotates 360 degrees The shavings container can be pushed out through the back, with enough pressure, as well as the front, although the crank will block it in its resting position.

The crank can be fully removed for cleaning or replacement. When removed, this reveals the inside of the pencil sharpener. Excess shavings can easily be cleaned out.

The shavings container is quite spacious and it appears as though it can hold many shaving. It can be fully removed, and is fitted loosely enough such that it will fall out if the sharpener is tilted forward.

While the sides and corners look very nice, the bottom does have some scratches and molding marks. This is unavoidable and it was quite nice to see that Carl decided to make them only visible on the bottom.

The plastic material is a finger print magnet and I had to really wipe it down before I took a picture. The logo and name of the sharpener is printed on the outside of the container.

The top of the sharpener has a sticker with the brand and name of the sharpener. Here, you can see some of the imperfections with the way the metal was fitted together and the subsequent paint issues. I would consider these minor, though, an acceptable at this price point. 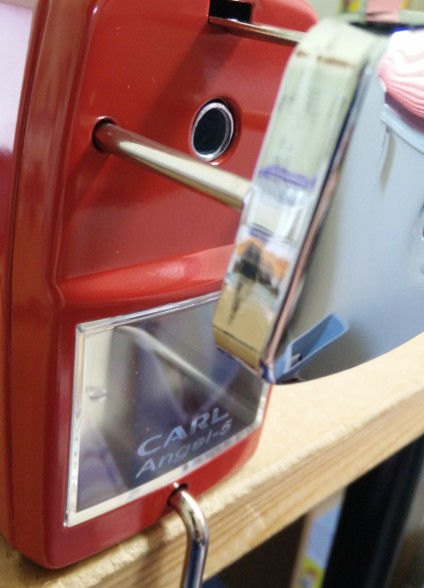 I decided to sharpen a Mitsubishi 9800 as my first pencil. I mounted the sharpener to my desk, before realizing that it was going to be hard to take photos, so I soon removed it. It works quite well, though. The sharpener felt sturdy and it would be pretty hard to accidentally knock it over. The plastic is soft enough that it wouldn’t dent a desk (not that my desk doesn’t already have lots of dents).

I extended the shiny metal section and prepared to sharpen a pencil. It was a bit intimidating to go about this. The sharpener was all shiny and perfect and there was not a speck of graphite dust anywhere. 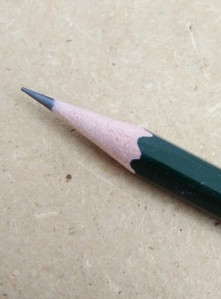 Out came a really nice point. It wasn’t the sharpest, but it was nice and long and well suited for writing. I am very pleased. But, I soon noticed something a bit discouraging.

The clamp really clamped down hard. On one hand, it’s a nice trait as it really pulls the pencil in firmly. However, it makes these really nasty dents in the pencil barrel. It’s most noticeable on the barcode area where it breaks through the lacquer and green is exposed.

It made a small pile of shavings. They were all nice and uniform and was easy to dump out. However, graphite dust stuck to the side of the shavings bin and it took quite a bit of time to wipe up the residue using a tissue and q-tip.

If I had to give a one word description of this sharpener, I’d say “good”, before going back and sharpening the rest of my working pencils. It’s fast and convenient and produces a nice point. If anything, my only complaint is with the dents it puts in the wood. That means that I probably will not sharpen many “nice pencils” in it, though this might change over time. That long point might just be too nice to pass up.