Below is a list of things that I want. Some things are on the list because I want to review them. Others are there just because I want to fondle them and be able to call it mine. As always, I try to keep them (relatively) realistic and at least somewhat useful although there are a few grail pieces on this list.

Most items are linked (all non-referral) to a product page or some sort of info page.

Here is an archive page with items on this list that were removed either because they were obtained or my tastes changed. 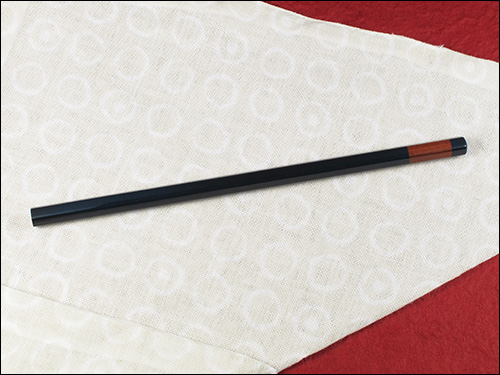 Of everything on this list, this particular pencil has to be the item that I currently want the most. Produced in 2008/2009 for the 50th Anniversary of Mitsubishi Uni, the pencil is a Hi-Uni lacquered with traditional Japanese Urushi. There is a section near the top which is the natural wood with clear lacquer. There were three colors, black, navy blue, and brown, with 30 of each manufactured. They were sold through Ito-ya in Japan. I have never seen one for sale nor have I seen any sort of auction history for this pencil. If anyone has any idea where to get one of these, let me know. There will be a finders fee 🙂

I first discovered Alvaro Romillo’s workshop when I was looking up whether or not people were still making nibs by hand. There appears to be a few smaller makers doing so (including Shawn Newton of Newton Pens), but Alvaro Romillo is probably the most notable. Based out of Spain, he makes every part of the pen, from the body to the nib to the feed. His pens are all eyedropper. I love how his pens have a vintage taste and the solid gold roll stop is both elegant and simple. Price is the only thing that is keeping me from purchasing one of his pens. There are no prices online, but forums posts indicate that his pens are usually $1000+. I’d personally want a short stubby pen with a large semi-flex xxf nib.

Ryo Yamamoto makes each fountain pen by hand using traditional tools and techniques. The current waiting time is around 10 months till delivery, though the pen you will receive will be complete custom and made to your specifications.

For someone that’s not into lights, having a flashlight on a grail list might seem a tad weird. Honest be told, I’m not that into lights, but when I am into well made tools. So, when I read a post on Muyshondt, I just had to read another and another. I soon found myself to be mesmerized by the workmanship and craftsmanship that Enrique Muyshondt puts into his flashlights. He currently sells one model, the Mk. III, in Aluminium and Titanium as well as a special Mokume Gane. Beyond the tight tolerances and the attention to detail that he puts into these lights, he recently demonstrated their durability by attaching one of his flashlights to a power drill and using it to cut through a store-bought MagLite! I am honestly in love with these tools but have not purchased one due to the high price and my little use for them. Pricing starts at $295 and goes up to $1495.

If you haven’t heard of Goruck, you should definitely check them out. They’re another American own, products made in the USA company. They produce some of the most durable rucksacks on the planet and host challenges (eponymously named “Goruck Challenges”) that involve rucking, teamwork and other skills. As a student that mainly just stays in urban areas, I have no use for such a large and robust bag, but I have met many who own and use this bag (and their bags I have fondled). It is one well built carrying device. Perhaps one day, when I have the time to go on road trips or go backpacking or hiking, I’ll go out and get one. They come in 3 colors and are priced at $295.

T.A. Davison is a custom knife maker in Mississippi. He’s known for his traditional slipjoints. He doesn’t use CNCs and free hands the bevels and grinds on his blades. When I first got into knives, I was one of those “tacti-cool” enthusiasts. However, upon seeing the work of T.A. Davison, Tony Bose and other makers, I saw the allure slipjoints. I love the file work that Davison does on the inside of knives and the way his knives flow. He posts knives for sale on forums quite frequently and knives can also be custom ordered from his website. Options include liners vs linerless, bolsters vs no bolsters, different types of wood and steel, and number of blades. He sadly no longer does file work on his blades. Linerless knives usually sell for ~$350 while multi-blade folders sell for ~$650+.

Peter Atwood is a custom tool maker that specializes in smaller single piece utility tools. He occasionally makes knives (usually fixed blades but occasionally folders), but when he does, they are amazing. They have a heavy emphasis on utility rather than beauty, but the utilitarian design does have a certain charm to it. The EDK is one of his larger knives although it is perhaps the least rugged. It is meant for the kitchen and its size appears to be just right for a number of tasks such as cutting onions and paring fruits. His last run of these knives was sold in 2011 and they featured S30V blades and a variety of handle materials. These occasionally go for sale and it seems as though most owners never used them. Prices range from ~$170 (used) to ~$500 (NIB).

Ernie Emerson popularized, if not invented, the folding tactical knife with his CQC-6. It featured a zero-bevel grind that is often seen on Japanese blades. In fact, Mr. Emerson  asked Phill Hartsfield, the famous American Japanese knife maker, if he could put his style of grind on his folding knives. The CQC-6, named after SEAL team 6, features titanium handles with Micarta overlay. The blade is traditionally 154CM although damascus variants exist. On the other hand, the CQC-5 is a shrunken down copy of the CQC-6 developed for carry in areas where knives need to have a blade under 3”. Even at 2.75”, the CQC-5’s blade packs some serious looking grinds and are reportedly some of the toughest knives available. Mr. Emerson’s knives are only available for purchase during lotteries and special auctions, where they slowly trickle into the secondary market. CQC-5s and CQC-6s usually go for between $1200-$2000 depending on the age and condition.

The Rolex Explorer I has somewhat of a cult following. Though I’m not big on following trends, I love this watch for a number of reasons. The Explorer I was the watch of choice for a number of famous individuals and was also one of James Bonds’ watch. It has a simple dial and classic looking hands encased in a smooth and flowing case. The aesthetics are just amazing. Technical-wise, the watch features a hacking manual wind movement and has water resistance up to 100m.

The original Jaeger-LeCoultre Geophysics is very similar to the Rolex Explorer I. They were developed in the same time period for exploring. The new Geophysics 1958 pays homage to the original. It has the same shape lugs and dial, but is upscaled to a diameter of 38.5mm. It has a new movement, the 898/1 which has hacking seconds and shock protection. It is protected by a soft-iron cage for magnetic protection. The watch is made in steel, gold and platinum, with the platinum version having a different dial. The steel version is a tool watch meant to be used. I can see myself never having to take it off as it has decent water resistance and the magnetic resistance. There were 800 of the steel version made and many are still up for sale.

A small typewriter, like a Smith Corona Calypso or a Hermes Baby