I found out about Pentel 999 scrolling through JetPens. I found it interesting that they described it as “Pentel’s highest performing professional wooden drafting pencil” as I am not that familiar with many of Pentel’s pencils. Though they were only relatively recently discontinued, they are difficult to acquire. However, I was lucky enough to get one through a trade (thanks Jack!).

Place of Manufacture: Japan
Price: ~$10 on the secondary market

From the pictures, the pencil originally came in a black box with grey writing. This matches the style, both in font and color, of the pencil itself. As I received the pencil through the trade, I did not get a box. 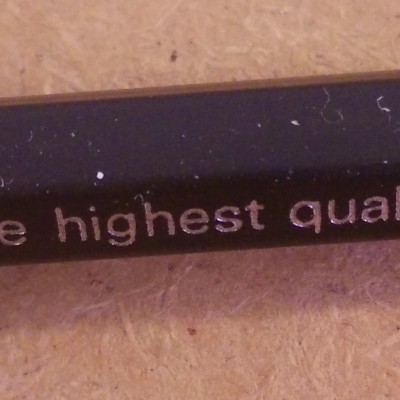 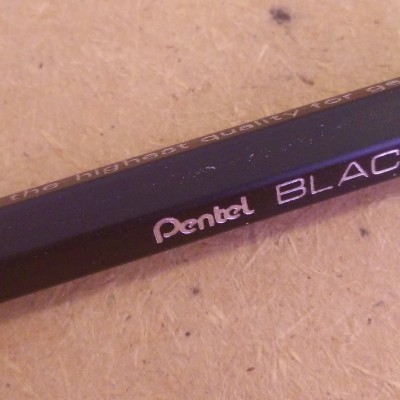 The pencil, being NOS, has some wear and tear. It appears as though the pencil was finished with a gray layer and then a black layer on top. There is some speckling on the barrel of the silver coming through the black paint.

The end of the pencil features some cracking on the gray end.

The gray rings around the barrel surrounding the graphite grade are not perfect and the edges are jagged. It appears as if there were multiple coats of paint put on unevenly or something.

The pencil is super light for its size. It has no ferrule, but it still weights less than any of the ferrule-less pencils I received in the trade and less than my commonly used Mitsubishi 9800.

Overall, the finish is not as good as I saw in the pictures, but perfectly understandable considering that this is a NOS pencil. The type of paint they used on the barrel is susceptible to these types of speckling and, as a user, I don’t think I’ll mind it too much.

The pencil features two main colors: a grayish silver and black. The barcode and UPC on the back are printed in white. As stated before, I believe that the pencil was coated in Silver before a layer of black was overlaid.

The font chosen is a sans-serif font that is “boxy”. The individual letters are wide and it works well with the feeling of the pencil. The “999” is created with smaller squares. This gives it enough pop without standing out too much.

Sharpening the pencil for the first time was frightening. Not knowing how it would sharpen, I was afraid that I might waste a large portion of the core due to some random mishap. Luckily, that did not happen.

I love the way the pencil writes. The pencil is light but still feels balanced in the hand. The lead is smooth. Way smoother than any HB that I’ve used (even smoother than the Hi-Uni). It makes a dark line that is easy to read. The one issue I have with it is that it seems like the tip degrades quickly. This can make for some big line variations depending on whether or not you rotate your pencil when using it.

I’d love to have more of these. They write like a dream. They’re not without their flaws, including a paint job that is lackluster and a tip that requires rotating. However, the dark line it puts down and the feedback it has makes up for it. I don’t think I’d pat ~$10 for a pencil based on my experience, but I will treasure the one that I have and use it whenever I want a change in feel.