It’s been a long ways coming for me to make my way into the big boy leagues of fine Japanese denim. I’ve always loved the white stripes on Momotaro’s “Going to Battle” line. Luckily, I procrastinated on my purchase for the 10th anniversary edition to come out, which have the white stripes as well as many other notable features. It’s been more than a year since I first got them. They’ve been all over the world, been worn more days than not, in weather on all spectrums. They’ve been through a repair, and will be needing another one soon, so it seemed appropriate to do a small write-up on how they’ve fared so far.

Momotaro is a denim company based in Kojima, Japan. Founded in 2005, Momotaro began by producing replicas of vintage American denim. Their name is from the legend of Momotaro, a young boy born from a giant peach who then descended to earth to become the son of an elderly couple. The pink inseam pays homage to this story

Their company has different labels including “Copper Label”, “Vintage Label”, “Battle Label”, and “Gold Label”, each with their own special taste. This pair is part of the “Battle Label”, with the white stripes on the back pocket symbolizing honor and strength, as per Japanese tradition.

I had a bit of difficulty determining my size, so I sent them an email. I promptly received a reply from Jay Doughten, who is the owner of Blue Owl Workshop. He was very helpful in going through my choices and was very informative. Shipping is free for orders over $100, and you get BOW rewards for every $100 that you spend.

They are sold out at BOW now, but they can still be found at some other retailers.

My first time putting on these jeans was not the most pleasant. They were very tight and I had trouble buttoning them all the way up without exhaling all the way. There was a bit of tension in the groin area, which made walking with a normal stride a bit difficult. I sent Jay an email, during which he ensured that they’d be okay (he also gave me the option of sending them back. 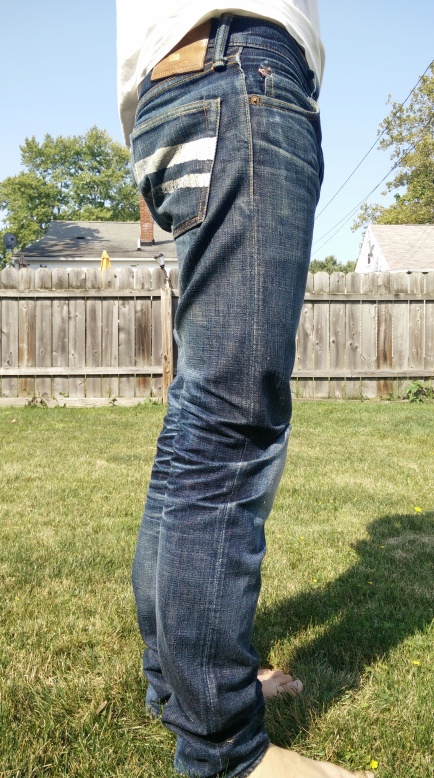 Within a few hours, my waist was feeling much better, and by the second day, they felt like a normal pair of denim. It is worth noting that they did not stretch out too much after the first week. 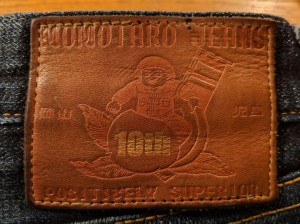 The patch is made of cowhide and has gold foil accents. Overtime, I have lost some of the threading, there is a small black stain near the top of the patch, yet most of the foiling remains. It has gotten a bit darker with wear, probably due to moisture.

Rivets made of brass. The rivets on the back pockets are hidden while others are exposed. They have nice detailing on them and, for the most part, are still quite shiny.

The button fly is very interesting. Every variation of Momotaro buttons were used in the fly, with the top button being a plain button. You can see the wear markings on the right sides of the buttons due to buttoning and unbuttoning the fly. 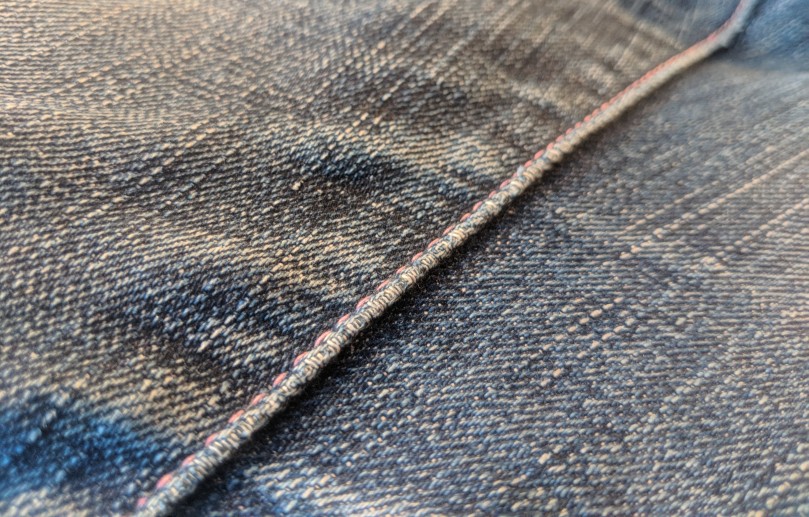 As with all Momotaro jeans, the inseam uses pink thread, paying homage to the peach that Momotaro was born out of. It makes the pair stand out quite a bit and contrasts nicely with the indigo.

The pocket bags are interesting, with one left pocket bag being in Japanese and the English translation on the right pocket. Some holes have started appearing in the pockets, but I will try my best to patch them up and preserve them.

As part of the 10th Anniversary package, there is also a canvas bag and a rope-dyed bandana. I cold soaked the bandana before I started carrying it for fear that it would bleed. I have had no issues with it.

The bag is made well and looks great. It is embroidered with “Momotaro” across the front. They used the same material for the pockets. I will probably cannibalize the back half of the bag for pocket patching material.

As noted before, this pair of denim has been out for repair once. At the time of repair (ca summer 2017), the knees were wearing thin, a crotch blowout was imminent, and the many threads were coming undone. 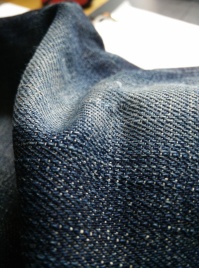 I sent them out to Indigo Proof, run by Rain Delisle, in Portland, Oregon. she did a multitude of repairs, notably reinforcing the knees, crotch, cuffs, and back pocket region.

The repairs look great i.e. they are not obvious at all. You have to look closely to notice that there are repairs. On the other hand, they also feel great.

I have to send them out to Rain, again, but I see a long life ahead of these guys. I am currently fading my PBJ-001’s from Blue Owl Workshop, so they’ll have some time to rest and refit. After the PBJxBOW contest is over, they’ll be mixed back into the rotation. Until then, they’ll probably just be worn when the PBJs are being washed. 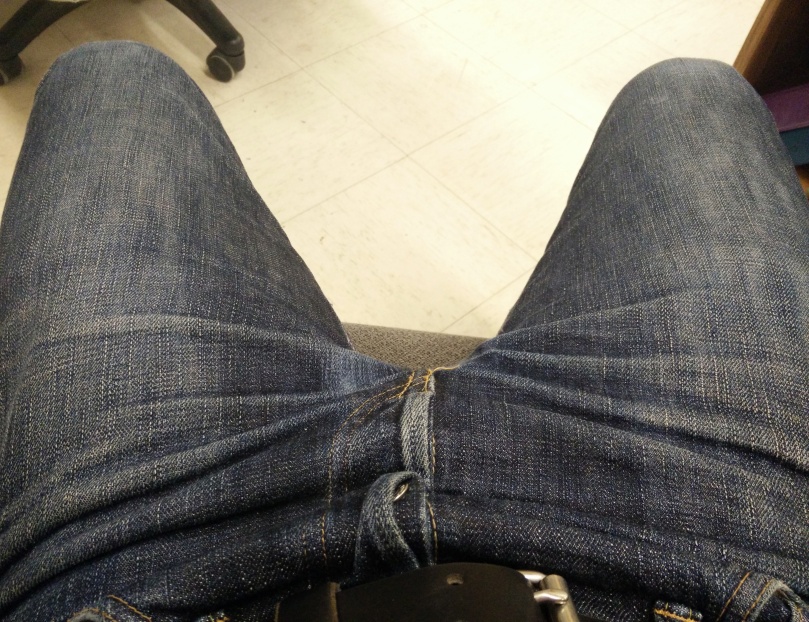